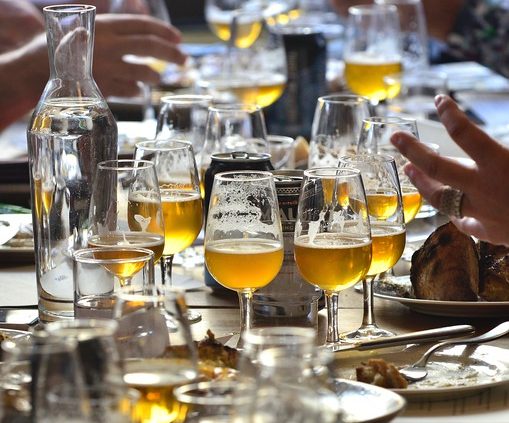 A few years ago I was quoted in the Daily Telegraph about how the shape of glassware enhances specific characteristics in beer and that the ugly pint glass had no place on a dining table because it was one of several reasons why in Britain beer was widely perceived as declassé.  The editor of the Op-Ed column, mentioning that I had said beer was a brilliant match for food, wrote that I was ‘utterly wrong’ and that beer should only ever be consumed in the pub and ‘if sustenance is needed a scotch egg or pork scratching will suffice’.  I wrote to the letters page defending my opinion and offered to arrange a battle of the bottle meal where wine and beer were served so the Op-Editor, who I shall call Mr Cholmondeley-Feathestonehaugh, could decide which was a better match.  He did not accept the challenge.

Around the same time I had written a blog for the Huff Post in which I fantasised that Buckingham Palace would offer beer to match the dishes at a State Banquet held in honour of President Barack Obama.   Of course it remained a dream.  In reality President Obama is much more likely to enjoy a beer state banquet than Queen Elizabeth is because he lives on Planet Beer and in beer and food matching particularly, America is the leader of the free world.

Give thanks to the Yanks because not only did the craft beer revolution start in America, but its impact internationally on brewers and brand owners is immeasurable.  All the iterations of India Pale Ale that are now available around the world, tangy Goses, barrel aged Porters and the love affair with highly aromatic and punchy hops would not exist without the imagination of independent brewers in the USA.   Those brewers have an inspirational trade association called the Brewers Association (BA) that represents 4,000-plus small and independent American breweries.  It actively promotes members’ beers through activities including festivals, media events, and trade shows. Their ambassadors, including Adam Dulye, travel widely to evangelise and enlighten people’s palates. In the past year during two visits to London Adam hosted feasts in the restaurants Sagar & Wilde and BRAT where exquisite food was matched with equally exquisite beer.  I had the fortune of attending both.  Casual dining this was not, it was elegant, imaginative, and beautifully presented.

Sometimes only the word phwoooar will do, so rather than rhapsodise in writing about how well the food and the beer worked together I shall just mention some of the sublime dishes and matching beers and maybe you will also say phwoooar.

Such fine dining in an actual restaurant with actual beer on the table is enough to make Mr Cholmondeley-Feathestonehaugh choke on his scotch egg!

Having these beautiful gustatory experiences makes me want to run down every High St in the land with a megaphone and say ‘Why don’t more pubs, restaurants, hotels operators offer diners a choice of beer matched with food?  Why don’t they realise that beer goes with every single dish on a menu and that we are in a golden age of brewing where the widest and most imaginative range of beers are being brewed.’  And then I remind myself of all the reasons why the majority of British based hospitality operators do not do the above.

Where do I begin?  In no order these include:

If the Queen was a beer drinker and it was served at official functions then beer in Britain would have the respect it deserves.  But until then we must acknowledge that the USA may be a republic but in beer and food matching terms it is royalty and we in Britain are serfs.

Nation Shall Speak Beer Unto Nation – A Manifesto