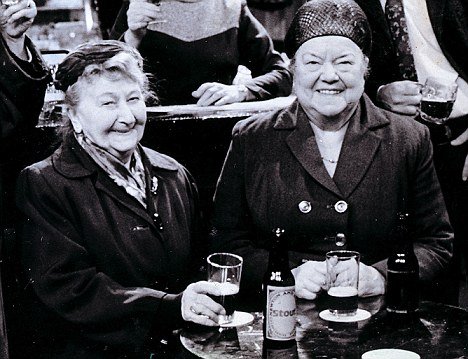 One of my friends was so inspired by Betty Boothroyd, first female Speaker of the House of Commons, that she named her daughter after the British politician.

My teenage niece, a distant relation of Nurse Edith Cavell is considering a career in nursing motivated by the sacrifice of the World War I medic.

My muse is fictional. A fearsome old battle axe in a hair net who trod the cobbles of Weatherfield striking fear into Elsie Tanner’s party shoes.  If you are familiar with the soap opera Coronation Street you will know that I am talking about the acid tongued Ena Sharples. I owe everything to Ena for she was the first person I ever saw drinking beer. Ena drank Milk Stout and she poured it with relish into the glass as she sat in the snug of the Rovers’ Return and gossiped with her friend Minnie Caldwell.  Seeing her do that is one of my earliest recollections.  In pre-colour TV days the contrast of the mahogany hued body and the white head of the beer was stark and made it stand out from the muddy shades of grey that dominated the screen.   Remembering that scene when I was older I realised it was not just the beer that was so vivid in the monochrome tableau of my memory it was that they were in a pub and the pub is where people assemble for a good time.

I am fortunate to have grown up in an extended family that congregated regularly for jollifications.  Often in the pub.  These gatherings involved drinking, singing and dancing, but more than anything, laughter. All generations socialised together, including children. I knew the difference between a Brown Ale and a Dark Mild, sneaking sips when Great Aunt Sabina was not looking.  Even as a seven-year old the sweet and bitter taste was manna.

As a teenager I ordered my first beer in a pub – a Light Mild.  I recall the theatre of the pour as the landlady pulled and pushed the hand pump filling the glass then presenting me with a glorious vision – a pint of tan coloured beer with a voluptuous foaming head. The thrill combined with the surge of adrenaline and butterflies I felt as I nervously waited for her to realise that I was an under-age school-girl and show me the door.  She didn’t.  I took a mouthful of beer and was hooked.

Ena Sharples triggered an enduring love affair. Love and Marriage, Fred and Ginger. Beer and Pubs.  You can’t have one without the other so I don’t.  Beer and pubs have afforded me utter joy in a career as a beer sommelier, writer, events producer, tour guide, drinks educator; some of my best afternoons and evenings out, romances, close friendships, improved my darts ability, perfected my karaoke version of Bohemian Rhapsody, pie and pea suppers at the local quiz, and conversations that I never imagined having such as the one with an Indian architect who taught me how to do chair yoga.

Thank you Ena.  Even though you were a sour-faced, critical busy-body you knew that beer is a balm that soothes the grumpiest of countenances and those hours you spent nattering in the Rovers’ were your favourite times.

Nation Shall Speak Beer Unto Nation – A Manifesto

Britain’s Pub Crisis – Use it Or Lose It

Cider – The Most Misunderstood Drink on the Bar?
Britain’s Pub Crisis – Use it Or Lose It