When I received an invitation to visit the Mahou Brewery in Madrid in July 2018 I knew barely anything about the company and had never tasted its flagship beer Cinco Estrellas.  In the UK I am probably not alone, although there can be few people who do not know another hugely popular brand owned by Mahou– San Miguel.   Mahou (pronounced Mow) is Spain’s largest brewing company with its beers in 60 countries. It also owns the Alhambra brand, plus stakes in Spanish craft brewer Nómada Brewing and the influential Founders Brewery in the USA.

‘Big Beer’ I muttered to myself when I learned these facts.  But then I spent a couple of days in Madrid with members of the brewing and marketing teams and had the full Mahou experience. It started with a visit to the gargantuan main brewery, then on to the company’s stylish brew-pub Espacio Cervecero where I helped to judge the food and beer matches created by catering students sponsored by Mahou, followed by dinner at the fabulous Street XO restaurant for some stunning food matched with exemplary barrel aged lagers (more of those later). It ended with some gentle head-banging at the Mad Cool music festival. I was smitten.

I learned that Mahou is a family business with seventh generation members working there and I witnessed myself how that family feeling extends to the employees, regardless of any blood connection. I sense that feeling too each time I visit Fuller’s Brewery in London –  family in its widest sense.

Mahou brand beers are soft on the palate well balanced lagers where the malt shines.  They remind me of some German beer styles which is not surprising as the company was inspired by a man from Alsace which at the time was part of the German Empire. Casimiro Mahou had the dream of opening a brewery in Madrid, his adopted home, but he died before this could happen. Like Bollinger and Veuve Clicquot with Lily and Nicole respectively who built the eponymous Champagne companies into powerhouses after their husbands died, it was Casimiro’s widow Brígida Solana who, along with their children founded the Mahou brewing business in 1890. Two of the original beer recipes – Mahou Clasica and Mahou Negra – are still brewed today.

A walk around Mahou’s ultra-modern headquarters outside Madrid reveals that the main brands are made in quiet and sterile conditions that reminded me of the space station sets in the James Bond film Moonraker. Contrast this with the cacophony in a bottling plant the size of several football pitches (see the video here) as a crimson river of Cinco Estrellas bottles with their red branding flowed relentlessly along a packaging line and it is a reminder of how much beer Mahou produces.  A lot!  But turn a corner and there is something unexpected – a microbrewery producing small batch craft ales.  Then look through a window to see an even smaller brewery, a pilot kit to test the beers that will go into production in the microbrewery. In a few steps we have gone from 007 to Goldilocks with breweries for Daddy, Mummy and Baby Bear.

The biggest surprise of all is hidden in a sealed room behind a secure metal door.  Hundreds of wooden barrels in spotlessly clean surroundings.  The unmistakable aroma of vanillin, the compound in oak that confers the flavour of vanilla to whisky and wine permeates the air.  But what are so many oak barrels doing in a brewery that primarily brews lager beers?  Aging lager beer that’s what.  Ale aged in oak barrels is quite commonplace.  The concomitant wild yeast or microflora in the wood or local atmosphere and the unpredictability they bestow upon ale aged in wood is welcome but lager in an oak barrel is another thing entirely and microflora and wild yeast are aliens not to be tolerated. Hence the room being sealed to thwart fungal interlopers.

Mahou is the largest lager brewery in the world producing barrel aged beers on this scale.  After 4 years of experimentation by the brewing team customers can now purchase a limited-edition range of beers called Barrica. The beer that goes into the barrel resembles Vienna style lager. The beer that comes out after 3 to 12 months of aging in used Bourbon, or in new American or French oak barrels is magical.  The range will develop further as the brewers experiment with different recipes, wood types, and barrels that originally contained other drinks.   On paper the aged beer with big vanilla, caramel, coconut, dried fruit characters should not work as a lager but in reality it succeeds spectacularly. The mouthfeel is clean and delicate and it drinks like a refreshing lager but with super-charged complexity.

With food the barrel aged lagers are even more sublime.  My hosts arranged a feast at the hip Street XO restaurant where the menu, matched with the range of Barrica beers included Vietnamese Duck and white shrimp sashimi with sweet & sour chilli and aioli; Char-grilled Iberian pancetta, relish of marinated mussels and pickled shitake with smoked sauce; Croquettas of kimchi, with sheep’s milk, tuna, and Lapsang Souchong tea.  Two words – flavour fireworks.   Beer and pizza this was not!  If you want to hear more about the beer and hear from one of Mahou’s brewers – Ingrid Vico – it was featured on the award-winning Fermentation Beer & Brewing Show podcast. Click here to listen. (from 1:16.00 mins in).

Whenever I have the fortune of experiencing such gustation it proves beyond doubt that beer rules the dining table as a match for food.  I have written before about the paucity of opportunities to dine with beer in Britain (click on this link for the myriad reasons) and I rue the wasted opportunities to give diners magnificent tasting experiences like the ones that Mahou shared during my visit.  It does not help that British beer culture largely consists of vertical drinking where the pint glass dominates. Standing up to drink beer is not conducive for eating much more than a packet of crisps.  Not so my experience in Madrid. Beer comes in a variety of glass sizes including the caña (just less than a half pint) which is a perfect size for grazing with small plates and tapas.

One of the joys of being a freelance writer is visiting countries for a hands-on-glass encounter with drinks and food culture and seeing what pleasure it brings people.  In many cases the dominant drinks brand has no connection with the locals or even a sense of place.  But Mahou is Madrid and it has what is important to Madrileños in its DNA.  Beer, food, socialising, football and music (with sponsorship of Real Madrid and the Mad Cool festival).  Beer unites people and tastes better when it is consumed in company.  I wrote this piece months after my visit with Mahou but my strongest memory is the way that we were immediate friends bonded by our shared love of beer.

Full disclosure:  My trip to Madrid and hospitality was paid for by Mahou.

I Owe It All To Ena Sharples 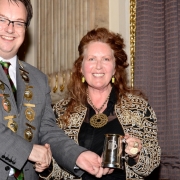