A woman walks into a pub.  If that sounds like the first line of a joke, you’re right but this one is a bad joke.  She asked for a cider but was served with a glass of beer.  When she pointed out the barman’s mistake he responded condescendingly ‘Beer and cider – it’s the same thing’.  That unfortunately is a true story. I know, I overheard the conversation.

I doubt that he is the only one who is clueless about cider. I regularly hear and read people referring to cider breweries.  Cider is not apple beer and is not brewed. It is made in a cidery by pressing apples and fermenting the juice. Like wine is with grapes.

Think about the following scenarios at the bar of a pub.

Customer:  May I have a medium glass of Cabernet Sauvignon please.    Bar person:  Yes – anything else?

Or:  Customer:  What India Pale Ale do you have?  Bar person:  On cask we have St Austell’s Proper Job and in cans we have Brewster’s IPA.

And here is another one:

You have no doubt heard those types of interactions before but with the cider the customer did not ask for a brand, or a specific style.  Most people don’t.  There is usually only one draught cider on the bar. Customers expect to get a cold fizzy drink that is a bit fruity and on the sweet side and that is invariably what they will get.  They may not even know that cider comes in a variety of styles and that not all cider is carbonated, chilled and sweet.

Cider comes as still, naturally sparkling, bottle fermented, Traditional Method, dry, medium, sweet, ice cider, cider brandy, acidic, tannic, wild yeast fermentation – cider made from dessert and eating apples, cider made from bold tannic cider apples. You’d never know by looking at the choices in most pubs and retailers.  Most pubs and retailers will offer customers a range of beers, wines and spirits, but cider is given little thought. Is that any way to treat Britain’s other national alcoholic drink?

Britain is the world’s biggest producer and consumer of cider.  56% of apples grown here go to make cider.  Cider has been a drink of these islands for millennia.  When the Romans invaded in AD43 they brought orcharding skills and domesticated apple varieties that replaced the wild crab apples that the natives used for making cider. The Normans who invaded in 1066 brought with them their tannic and acidic cider apple varieties and started planting and grafting and creating new orchards.

John Evelyn, the 17th century horticulturist and apple expert described cider as “the native English wine”. To make real cider the apples are pressed, the juice is fermented slowly and then often aged for months in oak barrels.   In the 17th and 18th centuries ciders were often on the dining tables of aristocrats, consumed from elegant glasses such as flutes. This was especially the case when foreign policy led to a scarcity of imported grape wine.

It is widely assumed that sparkling wine was invented in the Champagne region.  It was not.  Actually it was not invented at all, the sparkle is CO2, a by-product of fermentation. But until the mid-17th century it was considered to be a fault in wine because it made the delicate glass bottles  explode. Consequently it was known by the French as ‘le vin du diable – the devil’s wine’.  That is until England’s west country cider makers experimented by adding sugar to cider for a secondary fermentation in bottles made from reinforced glass known as ‘le verre Anglais’. The glass withstood the pressure of the CO2 and did not explode. The bottles were closed with corks creating an airtight seal unlike the ones in France that were often closed with wooden stoppers wrapped in cloth. Sparkling cider was a popular success and London based importers of still wine from the Champagne region copied the technique and soon sparkling wine was the fashionable drink. English cider makers had gifted humans with fizz and made it possible for Lewis Hamilton to spray his team mates with Champagne from the Formula One winner’s podium.

But hang on – there is a disconnect.  Cider has the wine, Champagne and aristocracy heritage connection and yet if you mention it to a person in the street the probable response will be along the lines of ‘worst hangover of my life when I was 15’, or ‘isn’t cider what the street drinkers neck’?   It does not help that the legal measure for draught cider is a pint.  Cider has a low value perception where quantity not quality is the incentive.

There is another disconnect too.  The cider that resembles wine is made from fresh apple juice but the biggest selling brands in the UK need only contain 35% juice (usually from concentrate) to legally call itself cider.  This means the remaining 65% is water, sugar, preservatives, caramel, colourings and other additives. Rather than the natural rural connection of the apple orchard and the farmhouse cidery where the cider takes months if not years to make, a big percentage of cider consumed in this country is an industrial product made in a factory in around 3 weeks with added sugar to make it drink like an alcopop.  Imagine the outrage from wine makers if a producer of sweetened grape flavoured diluted concentrate was permitted to market their drink as wine?

Is cider the fruity strawberry and lime concoction from Koppaberg? Is it the sweet cloudy apple-y drink from Strongbow? Is it the sublime Traditional Method cider in a 75cl bottle from Find & Foster? Is it the marvel that has aged for years in oak barrels at Oliver’s Cider & Perry only ready to be decanted when the fruit decides it is? Legally cider is all those things. The problem is that most people do not know it is also the 100 % (or near) juice version which may have some firm tannins and mouth-watering acidity, or may resemble Champagne. And people who might want that type of cider may be reluctant because of the negative association of white cider and park benches.

So how can we enlighten people about the diversity of cider and change their attitude that cider is rocket fuel, the quickest way to being blotto? Education that’s what! In 2018 the Beer & Cider Academy launched its accredited cider courses written and delivered by Gabe Cook, aka The Ciderologist. The courses lead towards the Pommelier accreditation. I have that accreditation and it has the added benefit of starting a conversation.  People are intrigued and want to know what a Pommelier is and what it entails.  This then leads on to a discussion about real cider vs alcopop cider and it has the result of elevating people’s opinion of cider.

Ten years ago beer was widely seen as just beer.  That was before the craft beer revolution started in USA. Now beer is the most discussed drink & has the most social media activity and passionate advocates.  Cider is going through its own craft revolution – again championed by American producers. Changes are slowly happening in the UK. The number of small independent producers creating fresh apple juice ciders is increasing. Cider advocates are vocal about quality, provenance, apple varietals, cider & food matching, organic, small batch & the artisan nature of cider.  These efforts are encouraging people to rethink cider.  It is happening on a small scale but it’s a start.  Real cider deserves our efforts. 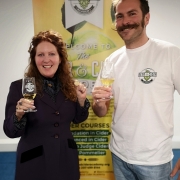 More is More – The Blackfriar pub, London
Scroll to top